To Our Human Family…With Love and Sorrow

March 11, 2020
Just this morning it occurred to me that I’ve been so busy following the primaries and anxiously researching the coronavirus that I’ve barely spent a minute reflecting on the nearly 5,000 people worldwide who’ve already succumbed to that disease. Let alone their many beloveds who are grieving them. My heart goes out to them. Death is no less devastating when it’s from a collective catastrophe.

And how can we even unite in mourning them when medical confidentiality insists that they go unnamed? We do know that Mr. Zeng, from Wuhan, was the first confirmed casualty. We've read about three Maryland residents returning from a Nile cruise; a man in his 50s from Washington; unnamed humans from Florida, California, New Jersey, South Dakota. We pore over references to them as we seek to contain our fears, asking ourselves, “Were they close to my age? Did they suffer underlying conditions like, or unlike, my own?” It’s a kind of claustrophobic loop of news watching and social media posting that’s holding millions of us hostage. 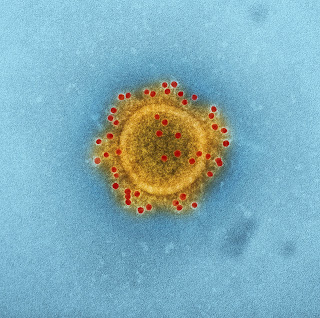 Photo by CDC on Unsplash

Speaking of hostage taking, these past four years have been a very particular kind of hell for us Americans. Given the wanton, relentless destructiveness of the current administration, we’ve awakened each morning to the news of yet more acts of greedy dismantling of helpful governmental protections of our water, land, and air; of our health care and educational systems; of our civil and human rights; of our relationships with allies; of the integrity and fairness of our voting process; of decency and civility—all treated with equal contempt by the human wrecking ball at the helm.

It’s hardly hyperbolic to conclude that we’re living in the darkest times that many of us have ever experienced. And if we widen the net to include the existential threat posed by climate change and the decimation of thousands of life forms in this precious planet’s biosphere, this era has no equal in human history.

As a Jungian analyst and therapist, I bear witness on a daily basis to the cost of the ongoing political nightmare—and the underlying dread over our shared climate emergency—to the human psyche. My patients have been suffering increasing anxiety, sleep deprivation, and hopelessness beyond the more personal torments of their inner worlds. And now we face a pandemic arising from Mother Nature herself, as if to make perfectly clear who’s the real authority over our lives.

From my perspective, one of the more distressing features of the current pandemic is actually one of its necessary remedies: the creation of distance from potential carriers of the virus—basically, everyone. As Tomas Pueyo reminds us on Medium.com, "The more we postpone cases, the better the healthcare system can function, the lower the mortality rate, and the higher the share of the population that will be vaccinated before it gets infection. How do we flatten the curve? Social distancing."

We’re rightfully urged to avoid crowds and gatherings; work from home; abstain from close physical proximity, handshakes, hugs, and kisses. What an irony! I can’t think of anything we need less as a species than an increase in the social isolation that our tech-dominated world has seduced us into.

It’s times like these that we desperately feel the need to be holding each other and holding one another up, exchanging our fears and deepest hopes, sharing the light of connection by which we humans have made our way through the terrifying unknown—what The Fleur Trilogy’s eponymic heroine calls “the void”— for 200,000 years.

It’s the nature of that light that my novel Chasing Eve seeks to portray, as a group of strangers—each in some way lost and unmoored, self-deprecating, beset by loneliness—find themselves thrown together by a set of crises not unlike the ones we all face today.  As reviewer Joey Madia of New Mystic Reviews notes in his review of the book, titled In Each of Us Are All of Us, “ Heath’s books…engage us further into the world’s troubles, as she ups the stakes on a macro level while pulling us in with her characters on the micro level. If literature has real value for the soul, this is it. “

Joey caught something there. My fiction is my own soul’s playground; besides cuddling an adorable young grandson or a devilishly delightful cat, hanging out with others I adore, and communing with nature, it’s where I go to make meaning of the darkness and, hopefully, shine a bit of light into the corners of it that hold some sort of treasure. In Chasing Eve, those treasures were the characters themselves—a homeless drunk once aptly nicknamed “Nosy,” a lonely old woman seeing catastrophe around every corner, a shy teenager fleeing sexual abuse, a handsome young transplant from the Midwest with a passion for acting. Not to mention its heroine, Ariel, a brilliant, but underachieving postal worker with a habit of reducing her value to the width of her thighs. As Madia points out, their unexpectedly interlaced journey evolves into a heroes’ quest, inspired by the bones of a 140,000-year-old African woman who may have been the female ancestor of everyone alive today. That he pronounced the book a reminder of “the connection that we all have to one another” and “an elegant ‘butterfly effect’ scenario…beautiful to watch unfold,” is a kindness for which I’m very grateful.

I’m also grateful to my marvelous publisher Melinda Clayton of Thomas-Jacob Publishing that the book is now available—along with The Fleur Trilogy, soon—not only in digital and paperback formats, but in hardcover, which beautifully showcases Holly Heath’s whimsical artwork. Ariel and I are delighted that Eve is being honored in this way.

But how do we honor those anonymous souls who’ve succumbed to COVID-19? Certainly, by carrying some awareness that they’re not merely statistics, but were once as alive as we are, that they sought love and meaning and connection and struggled with their own demons just as valiantly as we do. By letting one another know—if not by a handshake or embrace right now, then by words—how very crucial and precious we each are to our mutual joy and survival. By hugging up a storm when we, hopefully, emerge still living from this nightmare. And by kissing the ground when—please, God!—we overcome our antagonisms enough to elect ourselves a leader who does justice to the best of the human spirit and is capable of leading a nation through dark days with humility, compassion, and integrity.

May it be so. And best of health and warmest wishes to each of you members of our still astonishingly resilient human family.