My brother Gene passed into the Great Mystery a few days ago. I feel like I've lost a limb.

Dr. Eugene Frederick Karson was born on October 23rd, 1935. A brilliant, athletic, consistently curious, and compassionate man, he was my idol, my inspiration, my colleague in the helping professions, a great fan of my fiction, and in our adult years my increasingly close friend. An accomplished and much loved internist to multitudes of SoCal families, a cherished husband and father and grandfather, a devoted uncle and cousin, he wore the mantle of responsible and reliable head of an eccentric and lively extended family with a natural grace, twinkly-eyed humor, and a wisdom born of his earlier recognition that—as he once put it to me—"life is very fair; it breaks everyone's heart."

He should know. Gene was initiated into heartache at a traumatically early age when his mother Edna died when he was three years old—needlessly, as it happens, since penicillin had just been invented that could have cured her pneumonia, but was available only to those wealthy enough to afford it. Our working class father Charlie pleaded with the doctor to  dispense it, tried desperately to raise the ridiculous sum to pay for it, but was left helpless and bereft, as was his son. Charlie—whose own boyhood had been marked by abandonment, near-starvation, and violent anti-Semitism in Russia—was so despondent that he left Gene with my uncle Abe and his family for what felt like an eternity to the little boy. Only when my warm-hearted mother Ethel entered the scene and scooped him up did Gene have his own family again, but the experience of having been for a time a virtual orphan marked his soul with a certain sadness that would dog him for the rest of his days.

But make no mistake: that sadness was far from defining him. Gene was an active man. While I was the more bookish sibling, he was a surfer, a runner, a tennis player, a skier, a golfer. In the realm of the body politic, he and I shared a keen advocacy for human rights, equality, and progress for all. He loved film and theater and music and did the bump with style in the seventies. Oh, and nearly to his dying days, he was swoon-handsome. (Here he is with one of his own heroes.) 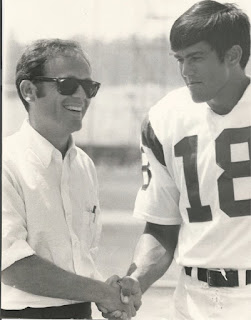 That he created such a full and accomplished life for himself was testimony to his determined life-urge and a strength of spirit that our family witnessed again and again, right up to the reluctance of his beautiful body to give up the ghost during his sojourn in hospice after a lengthy and increasingly debilitating illness.

Losing the last remaining member of my original nuclear family has left me devastated. My big brother was the living link to my childhood and our parents, the only one left to know me from my own birth and to appreciate from the inside the vicissitudes of growing up in the psychologically complex, politically rebellious, consistently humanitarian, financially struggling, culturally engaged, and rousingly passionate extended family that was the Karson clan.

But Fleur has taught me that we humans survive grief by tucking those we've lost into the holes in our hearts. Gene is fated to occupy a particularly large one in mine. Ironically, he died right in the midst of the release of the final novel of The Fleur Trilogy. I went straight from my book launch at the Jung Institute to his death bed. Not unsurprisingly, my brief talk at that event and the passages I read from Return of the Butterfly revolved around the theme of change and the great round of death and rebirth that Fleur harnesses from those exquisitely transformational insects, the butterflies, to help our species survive the threat of climate change.

One of the things I mentioned that day was a talk given by  Jungian analyst John van Eenwyk at the fifteenth International Congress for Analytical Psychology at Cambridge about an inpatient treatment program in Sri Lanka for children who’d been severely traumatized in the war zone. Some of these kids had been raped, injured, and had witnessed their parents being murdered. The response to such trauma is often the extinguishing of the capacity for fantasy, a disruption of the essential linking of internal image-making with experiences of the outer world. The way the therapists treated the children was by reactivating fantasy by giving them opportunities to create art, music, and plays about their experience, often writing new endings to their actual stories. It feels so fitting that the treatment center was called the Butterfly Peace Garden.

The Greek word for soul is psyche, which is also the word for butterfly. The butterfly is the perfect image for psyche, since, as Jung noted, the psyche is not a thing, but a process filled with the ongoing potential for transformation. I’ve experienced the healing power of creative expression myself, and writing about Gene right now is an attempt to begin to heal the ache in my heart.

Gene was a big fan of The History of My Body. Alas, he was too ill to read the next two books of the trilogy, but my niece Jennifer, bless her, actually read a bit of Tizita to him when he was recently hospitalized before coming home to die. That meant a lot to me. I’ve been living with Fleur Robins, her extended family, her friends, and even her enemies for over a decade. She's become part of my inner family. During the period of time that I worked on her story, the joy of doing my clinical work has deepened; I’ve delighted in teaching courses at the Jung Institute; beloveds have died; others, including Gene, have struggled with serious illness; a son-in-law and two Adorable grandchildren have arrived to make me a Yaya; I became a great-aunt to another Adorable; an elegant man of color entered the White House; a crude man succeeded him; we’ve entered the worst spate of species die-offs since the death of the dinosaurs sixty-five million years ago; and our climate has warmed nearly to the point of no return.

The Fleur Trilogy bears the marks of all those events.Though it’s a work of fiction, its author is not. During the writing of each book, I’ve consciously carried the opposites of death and birth, sorrow and joy, profound collective regression and a simultaneous burst of greater inter-connective consciousness, and in this, the final book of the series, Fleur herself struggles to carry the opposites of dread and hope, honoring and following her scientific giftedness while also confronting the mortifications ensuing from her ample shadow.

This girl, now a woman, this Fleur grabbed my creative imagination from the moment I asked psyche for a character who could tell her own story in the first person. She skipped ahead of me as only a lively, enthusiastic child can, leading me into the mysteries and debates of quantum physics, black holes and dark matter, multiple universes and the permanent linkage of objects  with shared properties. She developed her own perspectives on the eternal linking of people with shared histories. She beckoned me to the Nobel Prize Ceremony, to Ethiopia, and to Jane Goodall’s Gombe reserve, and in, Return of the Butterfly, she led me to confront—as she did—the social upheavals in sexuality and identity in our contemporary world, from gender fluidity and variations of sexual partnering to pornography.

Ultimately, writing a trilogy of a developing human being gave me a chance to explore change, including the changes that are occurring to our social and political fabric and to our biosphere. Just as there were two narrators in Tizita, there is a second protagonist in Return of the Butterfly, and she is the Soul of the World. One of the questions that Fleur’s story poses to me is how might we each, individually and collectively, face or fail to face the call to action from the Soul of the World to save everything that is precious about incarnation on planet earth.

Gene shared with me a profound concern for the fate of our species. It's for his spirited granddaughter and my own two young Adorables, for future generations of our clan and all human clans and sister species, and on behalf of our parents Charlie and Ethel and Gene's first mama Edna, that I pray we humans use the wisdom born of our own losses and the cherishing of life that wants to accompany them to tackle the existential threat of climate change. To paraphrase the Soul of the World in Return of the Butterfly, "a soul can absorb only so much grief at a time."

In honor of the brother whose beauty will stay with  me all the days of my life and the precious planet we shared for seventy-two years, here's a song our father loved to sing. Gene, my darling, I love you so.

Today I’m thrilled to participate in the first annual Sleigh Bells and Ink Wells Blog Hop organized by authors Smoky Trudeau Zeidel and Patricia Damery. If you scroll to the bottom of this post, you’ll find directions to the blogs of eleven fascinating writers I know you’re going to want to discover. And before you hop to the next blog, you’re warmly invited to leave a comment below, subscribe to this blog, and explore previous posts on this site…it’ll definitely ring my bell if you do!


I love the sleigh bell imagery. I’m a total Christmas nut. What else would the child of a Russian-born, Jewish atheist father and a mother raised on the outskirts of a Sioux reservation be? Actually, it’s my mom who deserves most of the credit. She grew up in the only Jewish family residing in the small town of Selfridge, North Dakota, and feeling utterly deprived of having a Christmas tree like her friends, swore to herself she’d make up for it when she left home.
Make up for it, she did. To my father’s…
Read more

Welcome to the sprawling streets of Los Angeles,where celebrity sightings are commonplace—at least in some communities on the Westside—and homeless encampments maintain a presence just about everywhere else. We may not be as compact as our tech-haven sister to the north or our great and gritty counterpart on that other "elite" coast, but we've grown in style and savvy over the years, so that—even in this treacherous era of climate change—our marvelous weather is no longer our sole enticement to curious visitors and eager transplants.

As a native Angelena,I take great delight in the rich diversity of my community, where ninety-two languages other than English are spoken in our public schools; where grace and beauty beguile the senses, from the ancient treasures of Malibu's Getty Villa to the acoustically soaring Walt Disney Hall on Grand Avenue; and where you can dine on some of the best dim sum, pad thai, pho, tacos and burritos, thin crust pizza, and churresco in the…
Read more