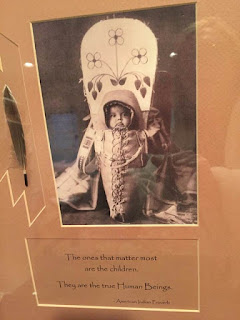 "And whoso shall receive one such little child in my name receiveth me.
But whoso shall offend one of these little ones which believe in me, it were better for him that a millstone were hanged about his neck, and that he were drowned in the depth of the sea."

In the entry hall to my home hangs this photographic meditation on the profound preciousness of children. A feeling for the numinosity of the young  has marked my life from my earliest days in Hermosa Beach, when an older girl—one of the many Dust Bowl refugee children who'd settled with their families in our then-humble beach town—welcomed this child of Jewish atheists into a backyard, Baptist prayer circle and introduced her to the baby Jesus. I'd learned about the value of children in my own noisy and loving home, where I listened to stories describing the tragic loss of all my grandparents' many babies except for my mother and where I witnessed my family's continued grief over the 1.5 million Jewish, Polish, Romani, and disabled children murdered in the Holocaust. My household was unsparing with love, unsparing with passion for the oppressed, and unsparing in its frank conversations about the evil-possessed people who coldly gassed innocents to death and the heroic response of decent, empathic souls to stop it.

If my extended family's love and overprotectiveness and fear for the safety of its youngest member conveyed to me the preciousness of the child, my secret exposure to the baby Jesus gave me an early appreciation for the wondrously healing and creative energies of the divine child and its simultaneous strength and fragility.

I knew then, and I know now, that the beauty of the young evokes in anyone who is whole and healthy only the greatest tenderness.

Years later, becoming a parent, and later still, as a grandmother, the opportunity to witness and tend to actual children became the universe's greatest gift to me, a gift that has kept giving exponentially. How could the fierce and tender love inspired by the blessed Adorables of my life not extend to all the Adorables of our world? With joy, in 1989 I conceived an issue of the journal Psychological Perspectives titled The Child Within/The Child Without. And I guess it was a natural that the first of my published novels would be about a rather divine child herself. Fleur Robins of The History of My Body showed up as the imaginal flower of my own idiosyncratic childhood, a soul constantly seeking new discoveries to vanquish her void, a keen-eyed observer and embodiment of human foibles, and, ultimately, an advocate for the sanctity and survival of our species in her attempts to free us from our dangerous reliance on fossil fuels.

I write today to sound the alarm (along with the American Academy of Pediatrics, the American College of Physicians, the American Psychiatric Association, the United Nations Commission for Human Rights, and numerous individuals and organizations devoted to the welfare of children and families, all of whom have made it clear that separation of children from their families is child abuse that causes excruciating pain and trauma that can scar a soul for the rest of its life and literally disrupt the architecture of a growing child's brain). In this current administration's policy of "Zero Tolerance" for illegal immigration, child abuse is being perpetrated in our names and with our tax dollars on children whose parents seek asylum from unbearable violence and poverty. These families arrive in response to what America has historically sought to stand for, put most movingly in these words of poet Emma Lazarus that are cast onto a bronze plaque at the base of our State of Liberty:

"...Give me your tired, your poor,
Your huddled masses yearning to breathe free,
The wretched refuse of your teeming shore,
Send these, the homeless, tempest-tossed to me,
I life my lamp beside the golden door!" 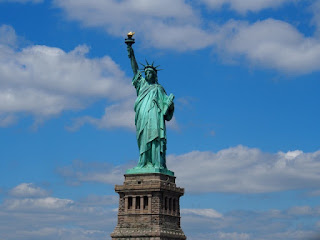 These touchstone words of our democracy have been cast aside in favor of separating children (including nursing babies, dear lord!) from their families. A terrible violence is being visited upon, not only the living individuals appearing at our border, but our American soul. We are at grave risk of becoming possessed by the very evil that 400,000 American soldiers gave their lives to defeat in World War II.

In his 1729 essay, A Modest Proposal (or, in its full title, A Modest Proposal for Preventing the Children of Poor People from being a Burthen to Their Parents or Country, and for Making Them Beneficial to the Publick), Jonathan Swift proposed his own ingenious solution to the economic plight of the impoverished Irish: selling their children to be eaten by the British. In some of the most elegant ironic prose in the English language, Swift waxed like the finest of food critics: "A young healthy child well nursed, is, at a year old, a most delicious nourishing and wholesome food, whether stewed, roasted, baked, or boiled; and I make no doubt that it will equally serve in a fricassee, or a ragout."

As a Jungian Analyst and psychotherapist, I've learned that in times of grave danger, it's especially crucial to tell it like it is. America is feasting on children. It's devouring their hearts and sucking their bones. In making policy and law that deny children affordable health care, fine and equal education, safety from racial and religious prejudice, clean water and air, protection from guns at school and on streets, and a commitment to battle species-extinguishing climate change, we're manipulating our littlest and most real humans as pawns of greed and power. As government officials become the actual perpetrators of child abuse, we the people have no option but to speak up, to shout out to the beautiful individuals and organizations that are working on behalf of children, and to ensure that we never again elect human beings as lacking in empathy as these sociopaths, whose philosophy and behavior is far too reminiscent of those who enslaved and gassed millions because they designated them—and their precious young—as "other." We may not hang a millstone around the necks of these sadistic governmental officials, nor drown them in the sea—that is, after all, the purview of the gods—but let's vote them out, let's lobby and petition and demonstrate peacefully but vehemently, and let's get as creative as we can in advocating for the innocent!

Below are but a few of the groups and resources to contact to become part of the solution. You're welcome to offer comments to guide readers to further resources.

Don't underestimate the power of pressuring your elected representatives. There are several bills and resolutions floating around Capitol Hill to prohibit family separations at the border and support migrant children, including the Senate Democrats' Keep Families Together Act and the Fair Day in Court for Kids Act.
Read our guide to contacting Congress here.

Get out there and protest

The coalition Families Belong Together has organized rallies and vigils in dozens of cities across the country. Find an event near you here.

Oh, and here are some songs to serenade you as you plan what you will do to help protect the children: