Songs of Root and Sky 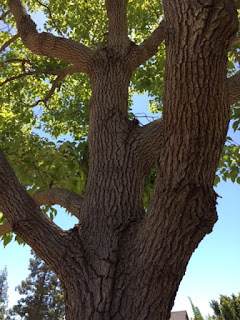 I'm a city girl. For most of my life, I've lived in SoCal, with a brief stint in Berkeley as a young teen. My family moved around a lot, but the closest we got to anything resembling raw nature was in my earliest years, when we lived just a few blocks from the Pacific Ocean in the smallish city of Hermosa Beach. In the summers, as my shoulders darkened to a deep brown, and my young feet and fingers dug happily into warm sand, I was lulled by the lavish roar of ocean waves. But it wasn't until I turned fifteen that I paid much attention to birds.

I've written previously on this blog about my appreciation for crows, those intellectual giants of the avian world, as well as my sorrow over one particular member of that species, Mr. Crow, whose plight elicited the communal action and angst of my little neighborhood, sandwiched between a couple of L.A.'s busiest thoroughfares. But if I have to be honest, mockingbirds have always been my favorite birds.

In the summer my family moved back to L.A. from Berkeley, partially in response to a wildness coming over their youngest child, I woke one morning to a fascinating variation of triadic trills. Its source was what I would later learn was one of the more inaptly named creatures on this planet - a mockingbird. This bird wasn't mocking; it was rhapsodizing, celebrating, jubilating. The purity of its tone and exuberance of its reach lifted the covers off my bed and thrust my body into the backyard, where I managed to get a glimpse of a gray and white fantail before the indignant bird swept out of its tree, scolding raucously.

I suppose it was no accident that a window opened in my heart that morning to the musicianship of birds. I was in love. From my parents' perspective, he was way too old. (He was.) From my own, he was magic. (Ultimately, not so much.)  A poet, a filmmaker, a tall glass of milk of a man, he introduced me to Alan Watts, Gurdjieff, the pleasures of the body, and the shock of an illegal Tijuana abortion. (And yes, Virginia, there really were days when that was one of the very few options for lost young girls, overburdened women, and victims of rape, lack of education, access to contraception, or a patriarchally conditioned inability to voice the word, "No!" I shudder to think that we are at risk of returning to that hell again.) Like thirteen-year-old Fleur Robins in The History of My Body - who sacrificed the future of her Baby X with no little anguish - I fell into a chaotic swirl of terror, sorrow, guilt, relief, and a dawning sense of awe at the difficulty of being human.

Fleur learned at a young age that serious loss is tolerable only if we can manage to secure our absent beloveds inside the deepest chambers of our hearts. She felt her way through the leadenness of grief to scoop up the spirits of her beloved grandfather, Baby X, a fallen sparrow in her abusive father's garden, and a rose in one of her mother's invisible flower beds that had succumbed to root rot. Years later, in the aftermath of her 21st birthday, she came to find a sound track to soul-saturating experiences of loss and longing in tizita, the sensuous musical form arising from Ethiopia's rich soil. And just as the discovery of quantum physics transformed the life of her mind in Book 1 of The Fleur Trilogy, in Tizita her melancholic dance with her Ethiopian-born fiancé led her unerringly, if messily, exactly where she needed to go.

When the loss of my first young love emptied me out, my own tizita led me to find an avian soul brother in the mockingbird protagonist of  Walt Whitman's Out of the Cradle Endlessly Rocking. I mooned over Leaves of Grass for long, solitary hours spent on twilit lawns and sun-drenched spots on UCLA's Janns Steps, hunched over a green-clothed hardback containing Whitman's aching stanzas: