Fleur's Back - in Tizita, Book Two of The Fleur Trilogy! 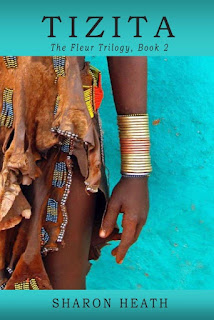 Fleur Robins burst into my life like a firecracker, excitedly skipping ahead of me, tugging me into realms I barely knew existed and stretching my mind as impossibly as childbirth once stretched my body. Writers are often encouraged to write about what we know, but my grasp of quantum physics was basically nil until Fleur's terror of the void and her insatiable curiosity led me to pore over obscure physics journals and daunting mathematical equations like the proverbial mad scientist - in my own case, an admittedly limited version of the real deal. I became captive to this young girls' odd-duckish sort of mind as she sought in her uniquely associative fashion to escape the "whirling pit of everlasting emptiness," first encountered on her abusive father's Main Line estate. Who else but Fleur would attempt to resurrect a beloved grandfather by plumping his suited crotch with water as he lay in his casket? Or repair a ruptured relationship with her best friend Sammie by shooting rice pudding out of her nose? By the time she'd finished with me, I was hardly surprised that she'd managed to win herself a Nobel for her notion of harnessing the mysteries of dark and light matter to battle the worst of climate change.  It had become quite clear that The History of My Body was her story, not mine, with me as mere transcriber of the wild turns of her first fourteen years. It was from that fateful assignment that I grasped that my true purpose in writing fiction is to write, not about what I already know, but what I need to learn. After all, what's the point of this achingly difficult and chaotically glorious ride of human incarnation, anyway, if not discovery?

Well, she's done it again, this time dancing me forward to her 21st birthday to the strains of Ethiopia's stirring tizita melodies. Book 2 of The Fleur Trilogy begins at a celebration dinner with her Ethiopian-born fiancé Assefa, their complementary blend of talents - "he a brilliant intern with an interest in cardiology and a background in literature as sophisticated as Sammie’s; me a whiz at physics, list-making, and cat quirks, and pretty hopeless at everything else" - having sealed the deal.

I had no choice but to scramble after her as Assefa took off for Ethiopia in search of his anthropologist father, lost somewhere on the road between Gondar and Aksum while tracking the storied path of the Ark of the Covenant. At her side, I saw her tremble over ugly encounters with racism and bigotry, learn more than anyone should have to about the torment of ambivalence and the cruelty of genital mutilation, and wrest free a bit of wisdom regarding humanity's shared root system from the shards of a broken heart. That Assefa insisted on telling  some of the story from his own perspective is testimony to how deeply he burrowed his way into Fleur's very essence...and into my own. Thanks to him, I'll never again be free of the longing and melancholy expressed in the Ethiopian notion of tizita, nor of the surpassing soulfulness of modern humanity's first home.

I'm a slow writer at the best of times, partly because - like too many of us in this modern world - I'm way overcommitted. I like to think of myself as enjoying the company of novelists far more gifted than I who also spent a portion of their time on other gigs. Some of my favorites in that department are Fyodor Dostoyevsky, engineer; Harper Lee, airline ticket agent; William Burroughs, pest exterminator; and Kurt Vonnegut, car dealer. In the decade it's taken to get this leg of Fleur's journey down on paper, I've managed to maintain my precious private practice as a Jungian analyst, weathered the death of a few extraordinary friends and colleagues, bitten down my nails over family illnesses, become a ridiculously proud grandmother and great-aunt, seen xenophobia and hatred infect our body politic, and been hopeless at mustering any semblance of denial that our reliance on fossil fuels is pushing our species ever closer to the brink of extinction.

In his "Motto to the 'Svendborg Poems,'" Bertolt Brecht wrote:

I've become convinced that it's simply not possible to endure our own dark times without humor, the arts, and love. During the writing of Tizita I've fallen captive to shock and dread, burst into peals of outrageously loud belly laughter, and leapt with joy at the impish antics of a young child - sometimes all on the same day. The music of Ethiopia has been my sound track throughout all of it. As (I hope! Please do!) you read this book, I invite you to play some tizita music yourself and get into that heart-melting, hip-rocking, agelessly yearning and spirit-sustaining groove.