Dance of the Big Hunger: Time to Vote!

November 04, 2012
It's election time in America. In case you hadn't noticed. The national temperature is way, way up, bringing to mind the apocryphal Chinese curse, "May you live in interesting times." 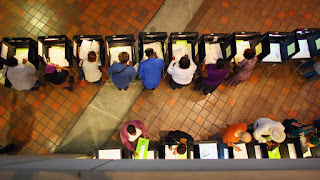 As kin on the right coast struggle to climb from the wreckage of Mother Nature's terrible reminder of the reality of climate change, everyone else I know is obsessively poring over polls, clinging to the prognostications of Nate Silver, swearing at the TV, avoiding the TV, calling swing states, ranting about voter suppression, preaching to the choir, biting our nails, and taking more acid reflux remedies than we'd care to count.

We humans have a long history of caring about the big picture...as well as denying it - which is undoubtedly why the power and scope of Hurricane Sandy took way too many people by surprise. That's one of the many reasons why the indigenous Bushmen of the Kalihari have something to tell us about what really matters.

In my article Honoring the Mantis Between Our Toes, appearing in the current issue of the journal Psychological Perspectives, I discuss Sir Laurens van der Post's description of the still-surviving prehistoric Bushmen as serious dancers. They have a dance for almost everything. The two dances they consider the most sacred are the Dance of the Little Hunger (for food) and the Dance of the Big Hunger (for meaning). Think about it. They pay homage to our need to eat for survival, but revere even more our yearning for a sense of meaning.

The young protagonist of my novel The History of My Body, Fleur Robins, searches for her own sense of what matters. She calls the feeling of meaninglessness "the void" and discovers that people have been finding solace throughout the ages in a variety of god-images, from the Greek Zeus (Friend of Strangers and Thunder God) to the piquant Ungud (aboriginal God of both rainbows and erections). 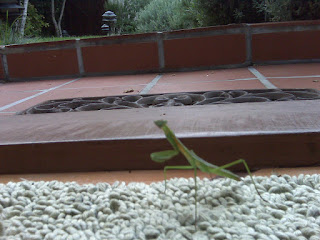 Being an original people in more ways than one, the Bushmen worship a god that happens to be a praying mantis. And guess what? I had a visit by one of those extraordinary creatures when I was writing my article. Carl Jung and physicist Wolfgang Pauli weren't fooling around when they came up with the concept of synchronicity.

The main thing I learned from Fleur - and who says we create our fictional characters? in my own experience, they help shape us - was that we are all interconnected in ways we can't begin to fathom. Jung acknowledged that reality in his idea of the collective unconscious, and nowhere can we find greater evidence of that than in our dreams. Which is why the Bushmen's mantis god is such a clever pants. When he's confused about what direction to take, Mantis consults his dreams. Following his example, the Bushmen do, too.


I had a dream awhile back of being asked by Barack Obama to put him in touch with indigenous poets. The dream began like many a fairy tale: the kingdom is in trouble, crops are withering, the future looks grim. The king needs assistance, which inevitably gets provided by some fool. (Yours truly plays that role in my dream.) I don't know about you, but I tend to think of our president as whip smart - you have to be to edit the Harvard Law Review. In my dream, the one with the heady intellect needs to be connected with the earthiest, the most primal, the most poetic of energies. The head needs the heart. The heart needs the head. They need to come together if the land is to be healed.

We Americans seem to be living out some particularly scary fairy tale, where we're at risk of flinging into the void the education of our children, caring for our sick and elderly, respecting the integrity of women's bodies and minds, and honoring the glorious diversity of our human tribe, as well as the flora and fauna with whom we share this amazing planet.


In 1936, Jung wrote in The Archetypes and the Collective Unconscious, “The tempo of the development of consciousness through science and technology was too rapid and left the unconscious, which could no longer keep up with it, far behind, thereby forcing it into a defensive position which expresses itself in a universal will to destruction.” What do you think he meant? I think he was suggesting that we've alienated ourselves from the slower rhythms of our natural instincts and that our inner natures are biting us in the behinds for getting ahead of ourselves.

As we approach November 6, nervy as a clowder of cats covered in fleas, I like to think that we are doing our own version of the Dance of the Big Hunger. As far as I can tell, we're either going to acknowledge we're in a vast tribe composed of many cultures and many creatures, committed to compassionately caring for one another... or we're going to take the whole show down, pulling thousands of species with us. We know where Sandy stands: Mother Nature voted early. Now, dear people - and, please Mantis, not just on November 6! - it's our turn.

It really does matter. You really do matter. Don't forget to vote!