You Wear It Well

October 22, 2011
No way to feign being blasé about this one: this past Sunday I had the joyous experience of launching The History of My Body, my first published novel after twenty-six years of writing fiction. The event was a rousing success – there was a gratifyingly packed house at the C.G. Jung Institute of Los Angeles as I spoke about my writing process and read from…my book!  Imagine my delight when copies of the book flew off the shelves of the Institute Bookstore to be inscribed by my beginner's trembling hand.

All of that – and my hopelessly broad grin - would be visible from the outside. 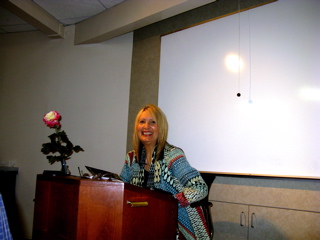 Less visible, but even more significant, is how poignant it feels to have stretched way beyond the opportunities afforded my parents - who worked their tails off as a plumber and waitress just to survive - and considerably farther into engagement with the world than ever imagined by the lonely outsider I was as a child.
That experience of loneliness undoubtedly played no small part in the genesis of Fleur Robins, the young protagonist of The History of My Body who, with virtually no guidance from her anti-abortion crusading father and fragile alcoholic mother, stumbles from one personal crisis into another while simultaneously setting the physics world on fire.
The symbolism and living reality of children have always grabbed me. It’s no accident  that I conceived and guest edited the 1989 issue of Psychological Perspectives devoted to The Child Within/The Child Without. As I noted then, “The child within pushes and pulls at the environment, opening perceptual doors that were fixed and making new and sometimes disquieting discoveries. It is this play that mines the mother lode of imagination and invention, shaping lives and world in new ways.” Those words read now like a foretelling of that precocious young girl who presented herself to my imagination several years ago, demanding I stretch my skills, deepen my commitment, persist writing despite the call of tens of drawers demanding to be cleaned out (right this minute!) – all so that her story might be told.
I’m finding it more than a little ironic that I’ve birthed this creative baby into the world just as I’m being propelled faster than the speed of light beyond the stage of life that the French like to call une femme d’une certaine age. So tactful, the French, just the faintest suggestion of that incipient sag of the jowls, the reluctant relegating of a fantastic sleeveless dress to Goodwill thanks to the hanging curtain of flesh appearing suddenly below an outstretched arm.
I came of age in a generation addicted to that most ridiculous of admonitions: “Don’t trust anyone over 30.” The phrase itself says everything there is to say about the hubris of youth in an era (and nation) whose idols knew very little of the kind of hardship experienced by the rest of the world. No young person in their right mind from, say, India or Ethiopia, would have balanced themselves on the ridiculously tiny isle of delusion that we ourselves wouldn’t – if we were lucky! – someday take our turns qualifying for Medicare, let alone blowing out thirty candles on our carrot cakes.
The cult of youth that was born in the sixties has, if anything, accelerated. My contemporaries and I joke, with considerable truth, that any kindergartner can operate a computer or iPhone faster and with significantly more comprehension than we can. These days, it’s a given that each generation can count on casting a wary eye backwards towards younger souls who’re cooking up the coming gizmos that’ll wow the world.
But the same era that is witnessing feats of technological magic is on the verge of catapulting us (and myriads of hapless species with us) into oblivion.
So perhaps it’s worth putting our ears to the ground to hear a word from our REAL sponsor, the earth whose vast bosom still nourishes us and from whose ample loins all of our soaring ideas and clever inventions have sprung.  One thing that we know about her is that she’s reeeeeeeeally old. A veritable crone. And like crones throughout the ages, she knows that we live or die based on our inextricable interconnection with one another and with all life forms co-inhabiting our shared home.
One of my favorite books ever - and one that served as something of an inspiration for The History of My Body - is Madeleine L'Engle's A Wrinkle in Time (which, p.s., was written for adults but could only sell when it was marketed for children). L’Engle’s book is a cris de coeur for the integrity of the individual, rooted in the deepening value of relationship and love. One of the most moving characters in her story is Aunt Beast, a physically unappealing but deeply accepting and nurturing creature whose love can heal the paralysis of despair.
Which takes us to this delicate moment in our human story. Our planet is heating up, and we are losing fellow species at a heartbreaking pace. According to All About Wildlife, polar bears, salmon, koala bears, and flamingos are amongst thousands of creatures facing extinction. While life on this vast earth has always been marked by continual cycles of birth and death, we need a kind of Aunt Beast Consciousness to ensure that rebirth remains part of that pattern.
My own mother had something of an Aunt Beast nature. Though she had the sexy appeal of a Simone Signoret or an Anna Magnani, she identified with neither youth nor beauty. She threw herself into life without reservation, hurt deeply when loss or worry came her way, and had the scars and wrinkles to prove both. The memory of her devotion has sustained me in some of my darkest and most dangerous days. On her deathbed, she expressed to me her regret that she’d not been able to achieve something in her lifetime that merited recognition. As I see the book that bears my name launch itself into the world, I drop to my knees in recognition of Ethel Karson, who spoke from the truth of the Earth within her and who is teaching me, as I age and bulge and sag, to adorn my body with skirts of suffering, to wear bracelets of compassion on my wrists, to perfume myself lavishly with the renewing redolence of old and ageless love.
Bill Withers Ethel Karson global warming Jung Psychological Perspectives The History of My Body