August 08, 2011
On a routine Saturday morning earlier this year, I opened my L.A. Times and began my ritual of absorbing the news along with my breakfast. Most of what I read was far less digestible than my eggs and toast: Egypt’s Mubarak was refusing to step down; a suicide bomber had killed a deputy governor in Kandahar; desperate Haitians were storming food distribution sites, and – this just in! (don’t forget I live in L.A.)  - Chris Brown had decided not to attend the Grammys, having assaulted Rhianna on the eve of the previous year’s awards show.
But it was page A12 that finally wrecked my appetite, making my food taste more like bile. The acid-churner was a story about a female bear who’d had to swim for nine days across the Beaufort Sea before reaching an ice floe. She’d lost her young cub on the journey, as well as 22% of her own body weight. There was little food available for her on the other end when she arrived.

Now, I’m a sucker for living creatures. I’ve developed a fondness for much-maligned crows and have been known to save worms trying to cross the sidewalk from the ravages of the midday sun. I’ve got three cats at home, one of whom has a bizarre shoe fetish that makes him try to mark every boot, slipper, and slide in my closet as if all nine of his lives depended on it. And, in case you’ve ever tried removing cat spray from carpeting, it’s a little like trying to pull something apart that’s been stuck together with Krazy Glue, only it stinks about as badly as skunk on a humid day.
Though the smell is satanic, I presume it's not the devil that makes Hobbes do what he does, but old-fashioned jealousy - jealousy of Buster, who usurped Hobbes' position as alpha cat by circling the house for three straight days, crying to be adopted as pitifully as a Panther-esque stray could without entirely betraying his feline dignity. But the destructiveness of my otherwise sweet friend Hobbes is small change compared to what we humans are doing to our planet. 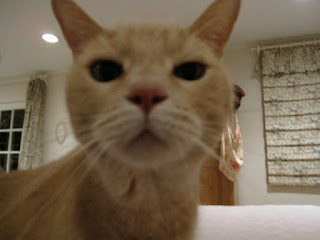